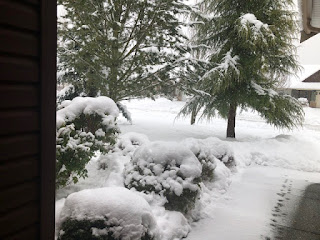 So over the weekend we got 3 days worth of snowstorm which dropped about a foot altogether.  Hubby was so sore from shovelling the sidewalks and our driveway.  Usually I am able to help him.  Fortunately the big melt is on now and it is raining which takes it away much faster, hopefully by the end of the upcoming weekend most of it will be gone. 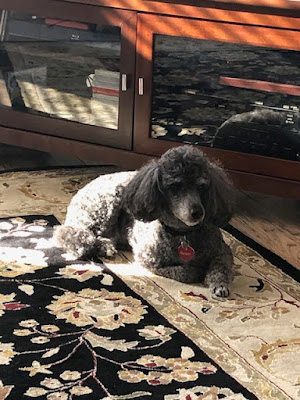 Buddy doesn't love the snow.  His poodle hair sticks to our wet snow like glue plus he is so low to the ground hubby had to shovel him a little path so he could do his business without freezing his junk off.  He is such a sun lover.  The second the sun came out after the storms he found the one sliver of sunlight on the carpet to sit in. 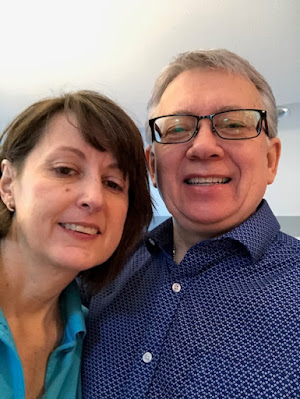 Chemo round 8 started back up yesterday.  We took this beforehand to document things - I still have a good amount of hair, hoping it holds until my 12th round is done.  I am still losing but haven't cut it except my bangs myself since August so it covers the thinness.

Other than that I am feeling pretty good.  You never have a lot of energy on chemo so I will still fight with those side effects but am pretty much recovered from pneumonia, thankfully.

I started our income tax, can't finish it until some slips come in but it is mostly done (Turbotax).  We had $6000 in medical bills so will be getting a refund.  Oddly enough, when I previously priced out Bluecross healthcare 2 years ago to cover extra hospital(semiprivate room as basic hospital is covered free)/dental/vision/prescriptions it would have worked out to $4000 a year and excluded some of hubby's preexisting conditions AND had a copay on some items so in the end I still think we are ahead of the game by paying out of pocket ourselves.  You do have to price these things out based on your own situation.

Stay safe everyone and have a good weekend!