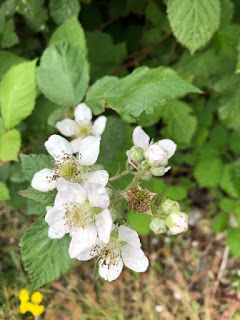 Well, hubby left on his 3000 km to Alberta(there and back) road trip at 7am this morning.  I hate that he is driving so far by himself and I hate being away from him for five days.  I used to rejoice when he had to go away for a few days on a business trip as I got some alone time, but now after being constantly together for 3 months I hate it.  The Province did go into phase 3 of our reopening plan which includes the allowance for people to vacation/travel within our own Province.  He would have gone anyway as saying goodbye to your Mother qualifies as essential travel which was still permitted.
Oh well, I will be fine. I've got a zillion things to do when he is gone - like take Buddy out 30 times a day if it is sunny and 2 times a day if it is rainy, mow the lawn, more painting, running Mom around for some errands and driving to Nanaimo to have Buddy get his first real groom since late January.
The blackberry bushes are in bloom and berries on the way.  In four weeks time I will begin the pick.  This year I intend to make lots of jam - blackberry and raspberry.  I will have to buy the raspberries but at least the blackberries are free.  I also hope to freeze a lot for winter treats. 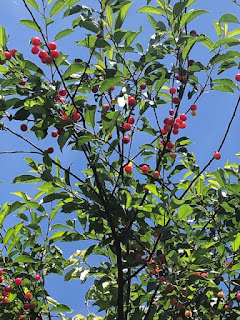 The neighbors have a large cherry tree that is currently dropping ripe cherries into my yard.  This has reattracted the rats.   Part of living anywhere near the ocean is the fact that rats like this climate and diet.   We have 2 live rat traps but I am not putting them out until hubby is back as there is zero chance of me transporting them and releasing them - that thankfully is hubby's job.   I do intend to get out the ladder and pick a few - they are going to waste anyway since there is no way he can pick the branches that hang directly over the corner of our yard.
I've now got real tomatoes growing as both the purchased cherry tomato starter and two of my grown from seed plants have flowered.  The cucumbers are in full bloom, I am hoping for a good crop of those too.  The peas are 3 inches long, just waiting for the peas themselves to get large enough to eat as this is not sugar snap peas but regular peas.  Next year I hope to get my hands on sugar snap peas again but they weren't available when I was planting in the Spring.  I might do a January order of seeds this year to start plants in late February so they are further along by June.
Last summer I bought this Canadian flag for $3 at a thrift store.  It is full size but faded.  I would like to get a newer unfaded one for future so put it up for free on the bidding site.  It got bid up to $6 - the timing is right with Canada Day being next week - so cha-ching I made a whopping $3, enough for two loaves of bread! lol 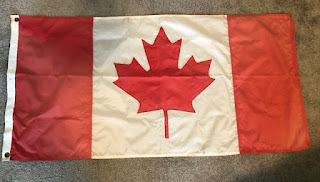 I also managed to be the high bidder on this Coleman stove on the bidding site.  We will use it for our weekend away to the cabin on the Ocean in August.  Now that we own it though I hope to do some hot dog evenings by the Ocean as this can be used even if there is a fireban on.  When hubby is back we will try it out.  The model is a couple of years old but the previous owners used it exactly once - and it is spotless so I believe them. 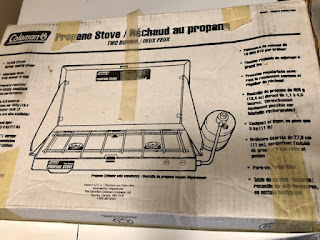 I am sharing a picture of one of the two flower pots that sit either side of our garage.  The geraniums I bought this year are the nicest healthiest ones I've every had - and the lobelia!  This whole pot cost $12 worth of flowers.  The pot is about 8 years old.  I do love that my flowers are doing well this year.  The Calobrachia did get an aphid and white fly attack but I bought some organic bug killer and after spraying them, washing them and plucking most of the effected flowers off the plants seem to be coming back quickly. 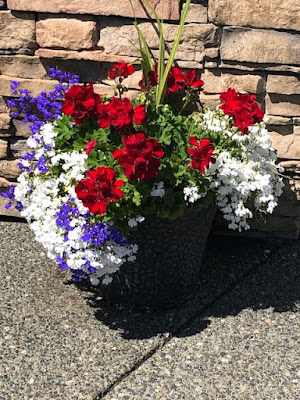 The front flower bed is filling in nicely.  I love the purple celosia and multi colored dianthus.  Both plants seem to be fine with rain and aren't being munched on by bugs which is always a problem in this flower bed.  My flowers are always an experiment, I don't know that much about them but I love this combo, likely will try to do it again next year. 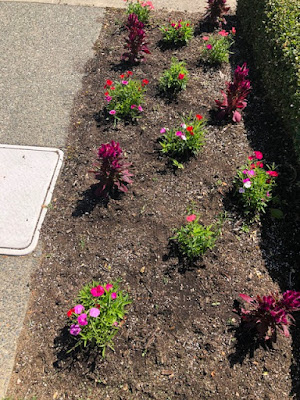 Finally a shot of Buddy soaking up the sun on his favorite spot on our patio.  He needs a haircut as heats up too fast - but he is such a sun seeker it is hard to keep him out of the sun. 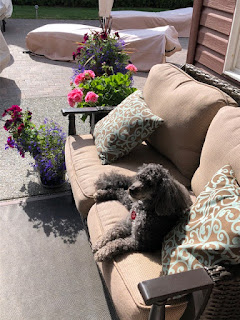 I hope everyone has a good weekend and stay safe out there!
Posted by Cheapchick at 8:46 AM