All About The Raspberries 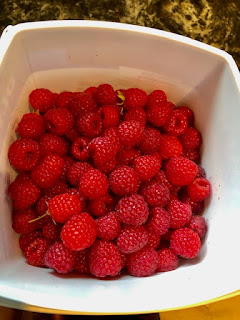 Yesterday was a good day.  It was almost like old normal - and I needed it.  Hubby has now made it to Alberta and today is trying to visit his Mom and the kids subject to lousy weather.  We are all hoping for the best.  He was good about texting me every time he stopped somewhere along the way so I wouldn't worry about him.
I spent the day keeping myself busy, had most of the house (except the bathrooms, those are tomorrow) cleaned by noon, did a bunch of weeding, catered to Buddy after he got stung by a wasp and other things.  I have a gigantic master list I make every time hubby goes away and see how much I can get done.  My stomach has not been great but I think that is due to stress.  Today it seems better.  I do have most of my energy back however, which is amazing.
My friend worked in the morning at the rec centre (which is still closed and they have no idea when they are opening but she is still being paid to do policy manuals which is boring as hell but she is still employed) so we agreed to meet up at her house afterwards for a long walk in the park.  We are still social distancing as she works out in the public but we both needed some friend time.
She sent me home with some lovely raspberries from her garden as she is getting a bumper crop this year.  This container doesn't look that big but I took home about 1 kg/over 2 lbs.
She also sent me home with some turnips.  I can't stand cooked turnips but both hubby and I love raw turnips and eat them like carrot sticks.
Last year we helped her a lot on the garden but she didn't have much in the way of harvests, this year she is doing really well and sharing the produce. 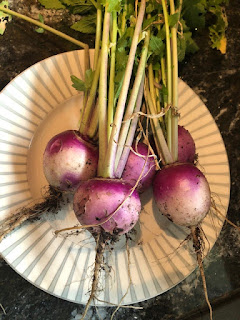 She made raspberry scones the other day so I was inspired and decided to make some for myself this morning.  They are absolutely delicious.  I got in my car and took half of them to Mom's house.  This is only the second time I've ever made scones and they turned out way better than last time.  They don't look like much but taste perfect!  The secret is using my mini chopper to chop the butter into the flour.  Also the sugar sprinkled on top gives it the perfect crunch.  Mom loved them.  I  also managed to use up the last quarter cup of older sour cream that was 2 weeks past its best by date.  As long as sour cream doesn't have anything growing on it it is still fine by the way.  If anyone is interested this is the recipe I used.  I wouldn't recommend using frozen berries but any kind of fresh will do.  Don't worry if the berries bleed, it just gives the scones a nice colour. 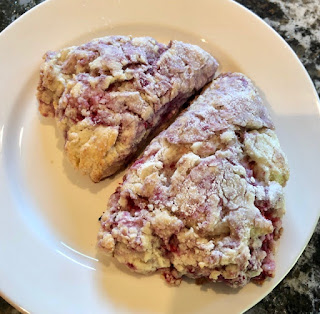 At most I only used a half a cup of berries so have plenty to freeze for blackberry-raspberry jam which is hubby's absolute favourite.  I made it last year for the first time and we ran out in January so intend to make even more this year.
We went on a very long walk - about 5 miles/8 km in the same Seal Bay Park that hubby and I went to last month when we went down to the ocean with Buddy.  That walks is only about 2km round trip and is another part of the park.  My friend's house is very close to one of the entrances to the mostly forest part of the park.  At over 1500 acres there are tons of trails for people to enjoy along with their dogs.  We encountered one biker and one jogger - that was it.  It didn't seem like we walked 5 miles but according to my fit bit, we had.
We came across this creature.  I thought it was a regular old centipede - about 2.5 inches long.  I don't love bugs but he was just crossing the path not bothering anyone.  When I got home I looked it up.  Apparently, the yellow sides are meant to warn off predators as he is poisonous and puffs out cyanide gas (for real) when hassled.  He can be dangerous to small animals.  His Latin name is Harpaphe Haydeniana Millipede but is known as the almond-scented millipede.  Not to be messed with.  He ventured on into the forest undisturbed. 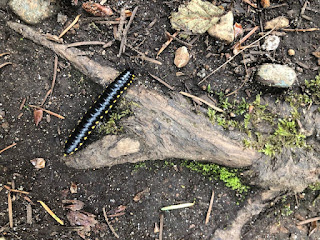 Other than Buddy being stung it was a good day.  No mask wearing as I went no where in public.  I social distanced with my friend.  Buddy was perfectly fine again later in the day by the way, just sore.  Today he has been ripping and tearing in the yard multiple times.  It is not the first time he has been stung so I know he wasn't allergic.
On the agenda today:
-mow back yard (grows twice as fast as front due to seeding it earlier this year and it gets more shade so grows faster
-change sheets (already washed this morning)
-water plants twice - it is supposed to be 27 C degrees today or 80 F - a hot one.
-play with Buddy, give him a good brush out and brush his teeth
-if I still have energy paint touch ups over the sink, put hardware back on and redecorate window ledge
-watch cheesy movie that I've recorded
Well, I best get at it.  Happy Sunday everyone - stay safe.
Posted by Cheapchick at 11:23 AM