All About The Strawberries 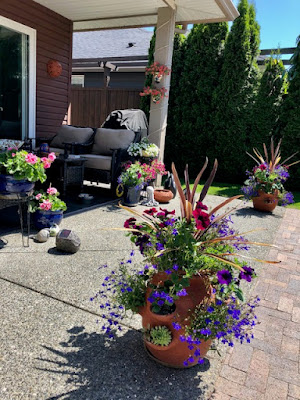 The terracotta strawberry pots I bought last summer have filled out brilliantly.  We've gotten some of the coldest wettest weather of any Spring since we moved here 8 years ago yet the flowers are loving it.  I don't think I've ever had nicer lobelia, the blue flowers have just made the pots fantastic.  I love the strawberry pots so much - I've just bought a 3rd and have to go pick it up today.  Last year I bought these 2 used (and scummy - see this post for the before and after with hubby's scrubbing magic) for $33.  We managed to sit on our new loungers the other day in the sun for about an hour before the weather turned for the bad again - hubby took the above shot in the sunshine.
The one I bought on the bidding site today: 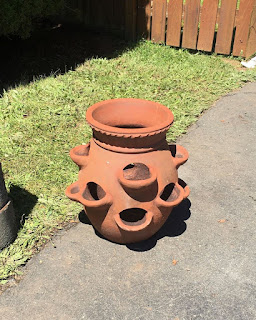 It has a little chip on one of the lips.  That is easily covered by plants.  I think I will use it as a backup rather than plant a whole new one this year as I am done with buying plants at this point.  I spent $24 which is higher but everything garden-related this year is going sky high.  I can't even buy these new here, I've never seen them in a store with the basic clay look, they are always glazed and always well over $100.
Groceries seem to be rocketing as well.  I actually went to the store and bought pork chops yesterday - the large pack was at least $8 higher than the last time I bought them 2 months ago - from the same store.  We are still eating in versus out to help counteract this.  Yes, we are tired of cooking.  I do see some takeout in our future.  One way to help counteract the high cost of groceries is to go for zero waste and cook everything at home and if possible from scratch. 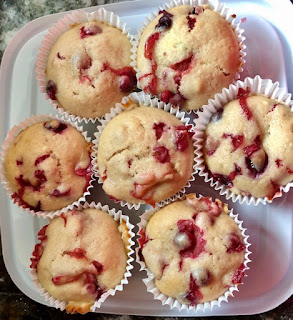 These muffins were made for about 25 cents a piece.  They are cranberry strawberry with orange juice in the batter.  I had no oranges or would have put in rind too.  The cranberries are leftover frozen from Christmas. The strawberries were a bit mushy a month ago (not mine, store bought) so rather than let them go to waste I chopped them up and froze them.  Worst case scenario they would have ended up in some jam.  Hubby declared these are some of the very best muffins I've made.  If I bought these from the store here they would charge at least $5 for 6 of them.  Instead for about $2.50 I was able to make 10 of them.  They are gone already as both of us could eat them.
Breakfast the other day was a banana and some of my own strawberries.  Both are apparently good for the digestive system, even if you have an ulcer.  The original intention was to eat some of the watermelon I just bought for $4 but as soon as I cut it open I realized it was rotten.  I was choked.  The last grocery order we picked up on Saturday I had to pay for them to shop.  This was a change as they had previously waived the $3 fee.  Now the fee is $5.  Anyway, I was also charged for an item I ordered but was not in the bags.  This happened 2 months ago as well but I sent an email and never heard a thing back.  Being tough to fight for customer service in a pandemic I let it go.  Now though, if Superstore is charging me $5 for the service I expect to get what I pay for.  They did respond.  I now have a $10 credit of a future pickup order.  I will likely do that this week and it will hopefully be the last one I need to do online rather than in person.  I wasn't feeling well and the idea of shopping for an hour and a half for Mom and I didn't appeal to me at all. 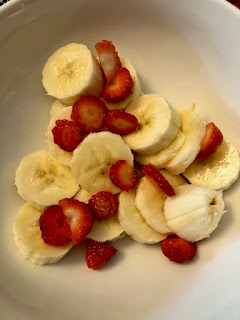 I feel a little bit better.  My health is back to about 60% of what it was in February before the issue with my tooth and the other issues began.  I do great until 5pm then crash and burn but I think the health issue has triggered my fibro so it could be a combination.  The good news is that the medication is somewhat working. I am not in as much pain or nausea - but food is still not my friend.  I dream of wine and cheesecake and chocolate.  All things like that are quite a ways off in the future.  Oh well, at least I can function now and we should know in a week or two how the test results came out.
That is life at the moment.  I will leave you with this final sky shot from the other night taken at 10pm after some of the clouds left the sky. Have a good week and stay safe! 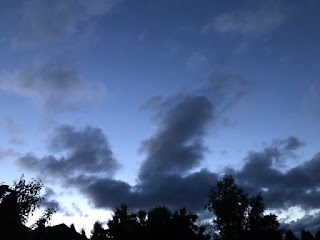