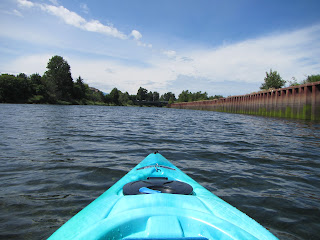 So yes, we did go kayaking yesterday.  All the stars aligned into good weather, high tide (a must for kayaking the estuary as it is too shallow at low tide), and low wind.  We committed to booking off from work at 1pm and hit the water.
I was feeling pretty good healthwise - I think when you have something to look forward to you just feel better and getting out on the water was what we both desperately needed.  We didn't push it.  We took lots of breaks so I wouldn't tire too quickly.  We were blessed with lots of wildlife.  I hadn't had time to charge my underwater camera so the first 3 shots came from that then it promptly died so we dug hubby's cell phone out of our waterproof bag and he took the others.
We came upon this adult eagle just hanging about.  He sat there for a full five minutes while we fumbled around with cameras and enjoyed the scene.  He even peeked down at us a couple of times but after determining we had nothing to do with groceries he pretty much ignored us.  We see eagles almost every day here, the only other place I've ever seen so many eagles was Alaska.  We rarely get to see them so up close and for so long, usually they are flying far overhead the house.  We just floated under the tree he was in until we were ready to move on.  As soon as we started paddling again he flew off. 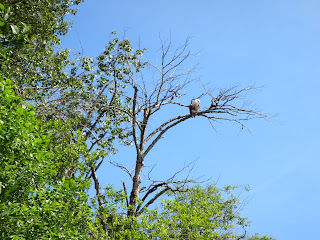 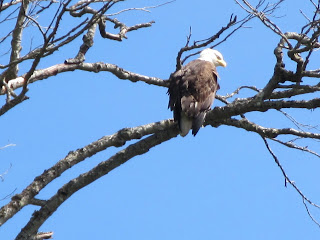 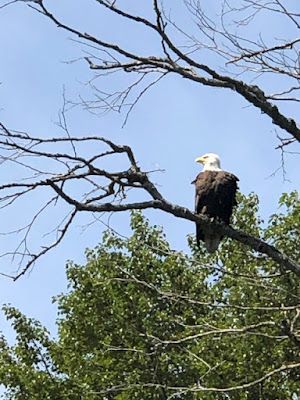 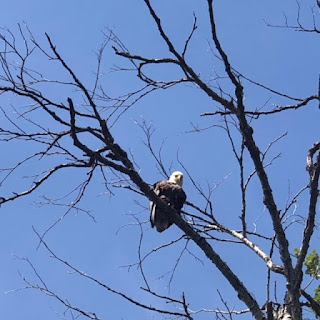 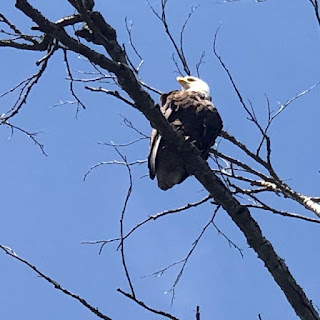 We also saw five belted kingfishers and two seals but all were too quick for us to get a camera on them.  Sometimes it is just nice to enjoy wildlife without taking pictures.  Seals are so funny, they are just like dogs, always curiously hanging around at a safe distance, popping their head out of the water to look at you when you least expect it.  Kingfishers are a very shy bird and one that generally doesn't like humans.  At the animal shelter if injured they rarely recovered as refused to eat around the presence of humans.  So to see five in one day was a real treat and their call is beautiful.
We arrived back home to an anxious Buddy, certain that after two hours away from the house we were never coming home.  Yes, even people who work from home all the time have anxious Covid animals who insist their humans be home now 24/7.  After barking at us on return (a sign of happiness/pissed off-ness at the same time) and throwing toys at us he settled down fairly quickly.
Last night we got a call from hubby's brother.  It was a call to come see his Mom for what is likely the final time.  Urgency is unknown but her organs are starting to shut down and protocols must be discussed.  Hubby and I got very little sleep last night.  BC and Alberta are opening back up and likely next week for travel across Canada.  Hubby is going to make a solo road trip, 2 days there and 2 days back to say goodbye.  Originally I thought we would both go but he has asked me to stay home due to my health.  A road trip would definitely be detrimental to me right now and eating takeout food while on the road would not work.  I think he is relieved I agreed to stay home.  At first we tried to see if we could get care for Buddy but that won't work as where we normally keep Buddy they can't take him due to just having a set of new puppies and don't want any other dogs to disturb that (or she is afraid of Covid and just didn't want to say it, either way, I get it).  Then there is the issue of Mom, taking care of our house, our dog and the topper being my health we both agreed, I will stay and he will go.  There will be a funeral at some point at which time we will both go.  In the meantime I will try and find alternate dog-sitting arrangments for down the road.    I wouldn't have been able to see her anyway, it seems the care center where she is at is only allowing a maximum of 2 family members for a special courtyard visit under these circumstances.  Hubby has to fill out a questionnaire first and we are asking for it before he leaves to make sure he won't be refused a visit once he gets there.
Flying was out of the question - for now, we don't want to take that chance.  Hubby has asthma so we have been super careful to date.  He will stay in hotels, not with family and he has always disinfected hotel rooms when traveling so will go overboard this time with disinfecting. Taking our own vehicle will eliminate further exposure from a car rental.  He will eat takeout and ready meals from the grocery store and not eat in restaurants.  He will see our 3 kids that live in Alberta but outside and socially distancing as they are all out in the public working unlike us who work from home.
It is what it is.  She has had no quality of life for a couple of years and everyone has made their peace with that - but hubby would like to see her one more time.  The pandemic is just making things so complicated right now.  I would like to see her one more time as well but that isn't in the cards.
That's it for today.  Hopefully, we both get a better night's sleep tonight now that we've figured out the plan.
Posted by Cheapchick at 9:48 AM