Time for an August check-in as this summer seems to be slipping away.  I've been busy.  In addition to our business, driving Mom around and volunteering this has been a summer filled with old friends and travel.  I've seen and done some new things and so far, it has been a lot of fun.

The animal rescue I volunteer at has one event where they supply volunteers as timers for a Logging Contest (Campbell River Loggersports) and the organizers donate $2500 to our rescue.  I volunteered for one of the days to act as a timer and it was so much fun.  Something that never in a million years I think I would have wanted to attend but was extremely fun to watch.  There was burling (trying to get the opponent off the log while both are balancing and walking on it), ax throwing and lots of chainsaw events.  I definitely will volunteer next year as well for it as they do this annually.

We had an invitation from a colleague of my husbands that he used to work with for a BBQ - in Sooke which is near Victoria.  That was a solid 3-hour drive both directions but since this summer seems to be all about connecting with old friends we decided to make the trip - Buddy had Grandma over to take care of him for the day.  I am so glad we went, although it made for a long day.  This gentleman's Dad purchased a 2-acre plot of land right on the ocean back around 1970 for $400,000 which at the time was a boatload of money.  It became the family cottage - including a 1940s log cabin.  It has stunning views and the house has been left exactly as it was originally built.  The father has long passed but the siblings are trying to keep it in the family.  That is harder than it sounds as the land alone now is worth $2 million and they have to pay extremely high taxes on it.  In Canada beaches are not private, only the land that comes up to it. 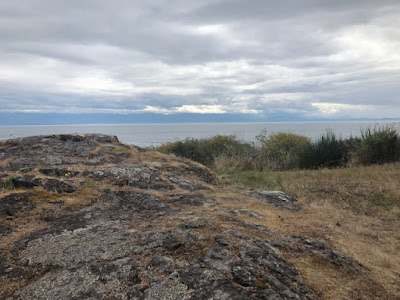 Not only were the views pretty amazing, but there was also an ancient petroglyph on the side of the cliff of an orca.  We have many petroglyphs (drawings prior to written language of aboriginals who inhabited the island) on Vancouver Island and surrounding islands but none that I have seen before.
The town of Sooke is the closest part of the Island to the US, in fact, while we were there our cell phones pinged telling us we were roaming in the USA.  We called Bell to make sure we weren't overcharged - apparently, no charges have appeared yet. 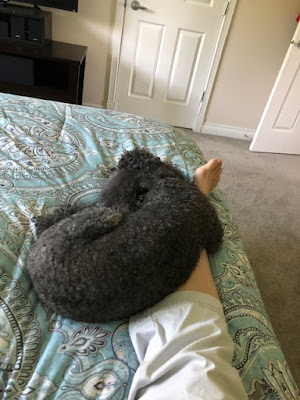 It sounds weird but I've never wanted a home office, much prefer to work wherever I wish to in the house.  This is sometimes on the bed with the dog wrapped around my leg.  He likes to know where I am 100% of the time, this way he can doze off and know when I leave the room.

We basically drove from one end of Vancouver Island (Sooke) to the other this summer as we just got back from 4 nights spent on a lovely small island called Malcolm Island, population 600 for my 50th Birthday.  We had to drive 3 hours from Comox on an extremely quiet highway where there is no cell service or radio.  Yes, we had left civilization as we knew it.  We ended up in Port McNeil and boarded the small passenger and vehicle ferry for Malcolm Island where we had rented a pet-friendly house on the ocean.  Other than gas, ferry, and accommodation costs we spent zero money on the island.  There was very little to spend money on - a small grocery store (we brought all our own groceries), a pub and two small food takeout places.  We ate in like kings instead.  Lots of hiking, beachcombing and relaxing on the large balcony with a glass of wine.  You had no choice but to relax there. 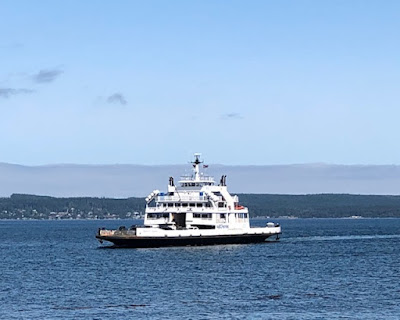 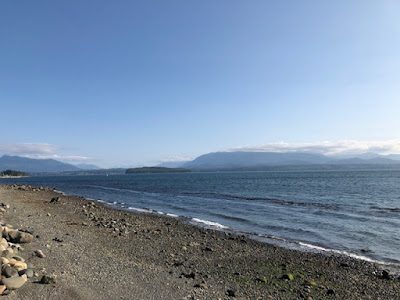 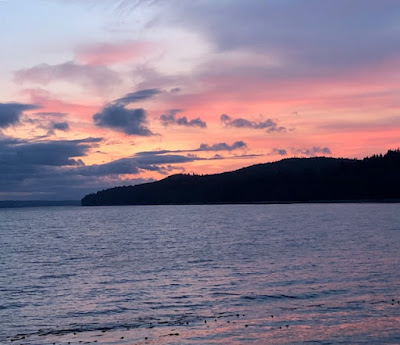 The sunsets were pretty there.  We also saw this Holland America Cruise Ship passing by - this is the route to the inside passage to Alaska.  This one was headed back towards Vancouver on its return. 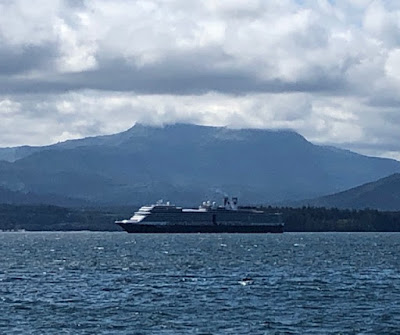 There is a park on Malcolm Island called Bere Point Regional Park.  Orcas can often be seen rubbing along the rocks on the beach below.  Not on the day we were there though as the wind was crazy and logs were being smashed onto the beach. Across the water are the Queen Charlotte Islands. 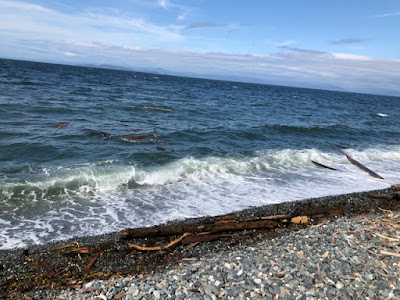 Buddy enjoyed his time with us - he loves trail hiking and beachcombing.  He really liked the large dog-proof deck as well, we spent so many hours out there watching the ocean and reading. 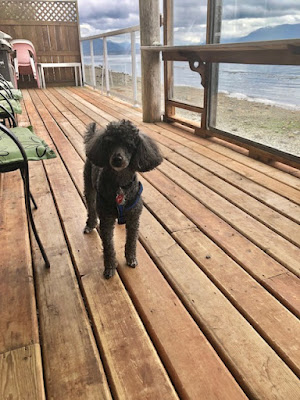 When you live on a small island with not much to do creativity abounds.  Someone had dressed up this dinosaur statue for the summer. 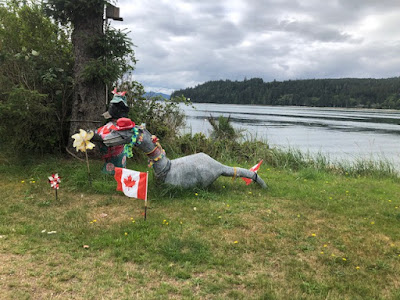 The marina was very pretty - lots of fisherman in this area. 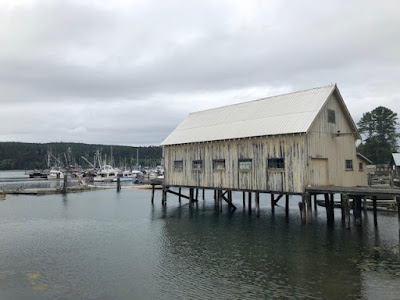 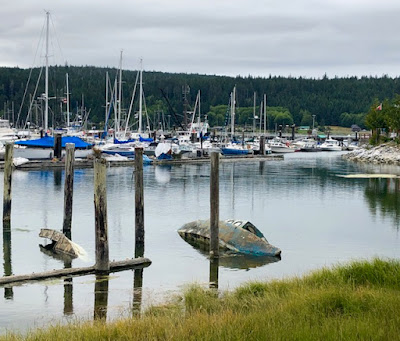 Someone had taken an old fishing buoy and turned it into a succulent planter hanging from a tree - great re-use. 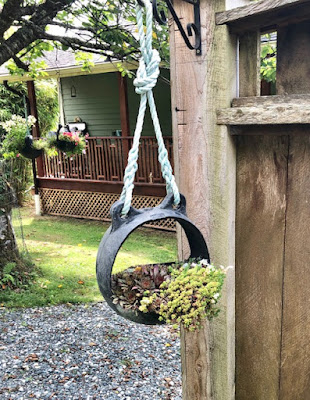 Also great re-use of an old canoe as a flower bed. 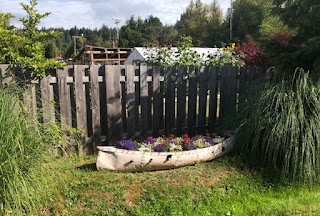 I brought some of my Ubrew wine from home.  It is surprisingly tasty and I have another batch on order which should be ready to bottle in about a week.  At less than $4 a bottle a true bargain in Canada where the cheapest wine is usually around $10 in the liquor store. 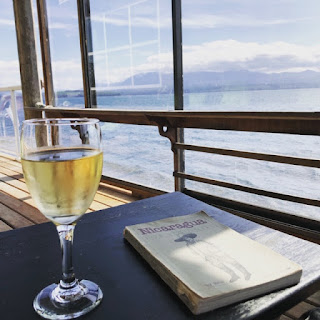 We have seen several friends this summer, many of whom we haven't seen in several years who happen to be on the island on holidays.  Life is busy but good.  Business is a little slower this year than last, we are hoping things pick up as we go into fall which is usually our busy season but in the meantime, we still have several weeks of summer left to enjoy.

We've had loads of tomatoes from our 3 plants, supplying both us and Mom plus now I am having to freeze some.  I am still getting a few strawberries every week from the everbearing plants.  I've ripped out the peas as they finished, really surprised at how many peas we ended up with.  My cucumbers are weird, growing into weird curly creatures but they still taste good and fortunately, I've gotten 3 so far with a few more growing on the vine.  Next year we are expanding the garden, currently making plans for that.

Mom has had both her eye surgeries and is almost done healing.  She still needed prescription reading glasses so rather than her spend several hundred dollars on those I ordered some for her through clearly.ca where I order my glasses.  She paid $44 and they should be here this week, I hope they work for her as they are so much cheaper than anywhere else.

Have a great rest of your summer everyone!