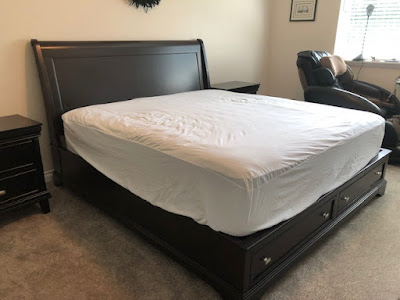 We finally have bedroom furniture again! After six weeks of sleeping on a mattress on the floor, our new king size bedroom furniture was delivered Saturday.  We really wanted a storage sleigh bed, had searched all over and found the right one at Costco.  We tried local stores but they all carried the same furniture lines, most with basic starter furniture.  We wanted permanent investment furniture.  Then we tried to order it and found out it could not be delivered to our area, part of the drawback of island living.  Hubby spent 2 more weeks back and forth on the phone with the manufacturer and Costco until they finally said yes but we had to pay an extra delivery charge. We agreed and it is beautiful.  We put our queen set in the spare bedroom when the carpet was done at the end of May as we didn't want to have to move it (super heavy) nor put the bed frame back together a second time- hence why we were sleeping on a mattress on the floor. No point in doing things twice.


We are very happy with the furniture - but it was supposed to be delivered at 9am so we got up early in preparation for it as had to move some stuff/vacuum etc.  By 9:45 hubby called the delivery people.  One of their guys did not show up for work.  Anyway, the second crew was able to deliver it at 2pm.  I just don't understand how people quit their jobs by not showing up for work. How hard is it to quit the old fashioned way, with courtesy?   Is it this new generation?  How do people who are such flakes operate in the real world?  I guess it shouldn't surprise me based on how flaky people can be when I sell them things on our bidding site or Craigslist. 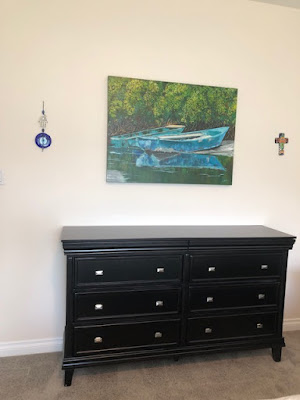 This furniture was expensive, at least to us.  But of course we put it on a points credit card and immediately paid it off.  We also spotted a 3x Aeroplan miles special on their website and got that even though we ended up ordering and paying by telephone once everything got approved.  We also got a tiny bargain Saturday.  Friday night hubby accidentally flattened one of our lamp shades as we had put it in a weird spot and he forgot it was there.  We don't have many retail choices in our town but we do have Home Depot.  The lampshade was $30 and we needed two but the second was dirty and I did not want to take a chance that I couldn't get the dirt off easily.  The Home Depot worker said we could have $10 off, then $15, then $25 off.  Yes, we almost got paid to take the second lamp shade home at $5.  Hubby said it was a good thing I was being stubborn.  Anyway, yes, hubby got the dirt out and you can't even tell.  They go very nicely with our existing 8-year-old lamps.

You don't see bedding as we are using temporary bedding right now - I've ordered new pillows (king size) and a comforter set with a second set of sheets but those may take a week or two to get here. Our old comforter set is still in excellent condition even after five years so will be used in the spare bedroom.   I am ready to stop spending money now though, the renos and furniture have depleted our bank accounts and I need a break from workmen and delivery people in my house.  Next summer the plan is to do outdoor patio renovations and buy some furniture there - we need to save up over winter for that.

In other news Mom had her second cataract surgery and it went well, although she seems to be having a bit more pain afterwards than the first.  I take her back to her Dr on Thursday to have a look.  It is also a bit blurry but the Dr said that was a stitch that needs to heal.  It will be weird not seeing her in glasses as she has worn them since she was 12.  She does need to wear really good sunglasses when outside from here on out - we went and bought some with store points last week so she is ready to go. 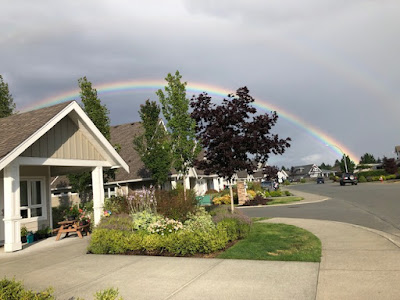 I came across this rainbow while out walking Buddy earlier this week - the end on the right side is on my street!  It was actually a double rainbow which you can barely see in this photo. 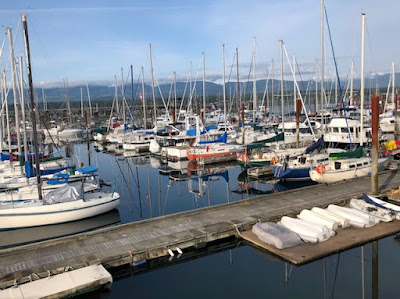 While Mom was at her eye Dr the day after her surgery I walked the 3 blocks down to the Marina.  It is really lovely at 8am, I need to go down there in the morning more often.  Very peaceful with just me and a few birds and some bumblebees along with a few fishermen going out in their boats.  This is the same Marina where we will be leaving for our fishing trip on Friday. 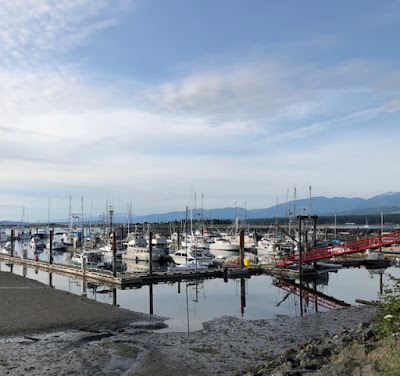 Thursday Stepson #2 flies in for four days and then Friday we go on our annual fishing trip.  We are all looking forward to and so far the weather looks decent - not too hot (20-22 degrees C) and sun/cloud with a minor chance of rain. It is so nice to be able to just pay for fishing with cash saved up from selling stuff both for resale and things we no longer need the past year - zero extra out of pocket was required. We take snacks and drinks and layer clothes so we should be ready for anything.  The rest of the weekend will be spent having fun - maybe some hiking, some kayaking, and our town is having a market day so likely we will go to that.

That's what's shaking around the island pad - have a great week everyone!
Posted by Cheapchick at 9:28 AM